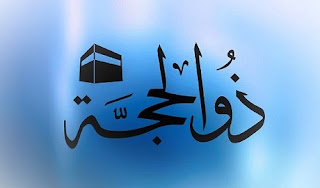 Dien is undoubtedly the perfect and only solution; infact it is the only prescription for our success in dunia and Aakhirat! …But what is Dien? Dien is not only the outward attire – although that itself is essential and very much required. It is not the titles of Mufti, Moulana, Imam, Hafiz, Qari, Tablighi, Sufi, if the reality is a wolf in sheep clothing. It is not the Darul Ulooms, Khanqahs, the work of Tabligh, social and welfare efforts, etc. All these are absolutely required and are part of our Dien. However, Dien itself is sincerely and honestly PRACTISING on the Commands of Allah Ta’ala. When Islam is practically implemented in our lives, we will see with our bare eyes and the eyes of the heart, all our open and manifest solutions and successes. Others too will see the same, be they Muslims or non-Muslims! The requirements are Amal and Ikhlaas.

The four sacred months of the year - al Ashur al Hurum – are Rajab, Zhul Qadah, Zhul Hijjah and Muharram. The rewards of all good deeds are multiplied and compounded tremendously. We should be conscious of the value of these months and increase our Ibaadaat in them. We should also bear in mind that sins are also multiplied at such times, and should thus be shunned completely. Just as we endeavour to observe the month of Ramadaan, similarly these months should also be honoured and observed! Nabi Sallaahu ‘alayhi Wasallam is reported to have said: “The reward of 700 years of worship will be recorded for that person who fasts on Thursdays, Fridays and Saturdays of the sacred months [of Rajab, Zhul Qa’dah, Zhul Hijjah and Muharram.][1]

Hadhrat Ibn `Abbas (Radhiyallahu 'Anhu) reported that Rasulullah Sallaahu ‘alayhi Wasallam said: "There are no days in which righteous deeds are more beloved to Allah than these ten days."

The people asked: "Not even Jihad for the sake of Allah?"

He (Sallaahu ‘alayhi Wasallam) said: "Not even Jihad for the sake of Allah, except in the case of a man who went out, giving himself and his wealth up for the cause (of Allah), and came back with nothing."[2]

This shows that Ibaadaat in these days is even more valuable than Jihaad, which is well known to be so superior and honourable.

The King of Ibaadah is Salaah, so Salaah should be performed in quantity and quality, with Khushoo (concentration and devotion). We should undertake to perform our Qadha-e-Umri, and also engage in Tilawat of Qur’aan Sharief, Zikr, Dua and other forms of Ibaadaat.

One particular Ibaadah for the first 10 days of Zhul Hijjah, as mentioned in the Hadith, is the third Kalimah. Hadhrat Abdullah Ibn 'Umar (Radhiyallahu ‘Anhu) related that Rasulullah (Sallaahu ‘alayhi Wasallam) said: "No days are as weighty with Allah and so liked by Him for good deeds than the first ten days of Zul Hijjah. So on these days increasingly read: Subhanallah, Laa ilaaha illallaah, Alhamdulillah and Allahu Akbar."[3]

Salaatut Tasbih, wherein we recite the same Tasbeeh x 300, will become the King of Nafl Ibaadah during these special days. How wonderful if we could perform this Salaah every day and night in this blessed time!!! We should try to create an environment as we do in Ramadaan; and since there is no Taraweeh, let us read Salaatut Tasbih.

Then arrives the 9th of Zhul Hijjah which is the King of Kings of days, the Day of Arafah, in which Allah Ta’ala boasts about His bondsmen, and shaytaan becomes the most dejected and miserable on this day. Allah Ta’ala loves His Ibaadah the most on this day, in the entire year! On this day, the GREAT, GREAT, Ibaadah is the fourth Kalimah:

We should read this Kalimah in great abundance on this day, together with other forms of Ibaadaat!!

Fasting for each of the first 8 days is equal to a full year's fasts. The fast of the 9th includes atonement for the sins of the previous and coming year! What a great spiritual windfall! Forgiveness from Allah Ta’ala is a great and much needed bounty, which can be acquired here so, so easily!!!

Allah Ta’ala’s Greatness, Oneness and Praise are expounded in this beautiful Takbeer. Reflecting over the meaning and words will build our Imaan and cultivate the quality of Abdiyyah (servitude) in our lives.

What to say of the five days of Hajj!  …Mina, Arafah, Muzdalifah, back to Mina, Makkah Sharief, Tawaaf and Sa’ee!!! What great and honourable days! Even if we are not there physically, we should be there with our hearts and souls!

Then the 10th, 11th and 12th are the great days of Qurbani, wherein nothing is more beloved to Allah Ta’ala than the slaughtering of Qurbani animals! We should do the Qurbani with large, open hearts! The animal's weight will be increased 70 times and put on the scales of good deeds with its horns, hooves and so forth!

Rasulullah Sallallaahu ‘alayhi wasallam said: "There is nothing dearer to Allah during the days of Qurbani than the sacrificing of animals. The sacrificed animal shall come on the Day of Judgement with its horns, hair, and hooves (to be weighed). The sacrifice is accepted by Allah before the blood reaches the ground. Therefore, sacrifice with an open and happy heart."[4]

Even if Qurbani is not Waajib on a person, he too is encouraged to make Qurbani, if he can arrange and put together some money. It is encouraged (not Waajib) to make Qurbani for one's minor children, with one’s own money (not with the money of minors). Nabi Sallallaahu ‘alayhi wasallam said sacrifice with an open and happy heart!

May Allah Ta’ala grant us true appreciation for these magnificent opportunities, and grant us the Taufeeq of following through with the beautiful direction given by Allah Ta’ala and His Rasul Sallallaahu ‘alayhi wasallam.