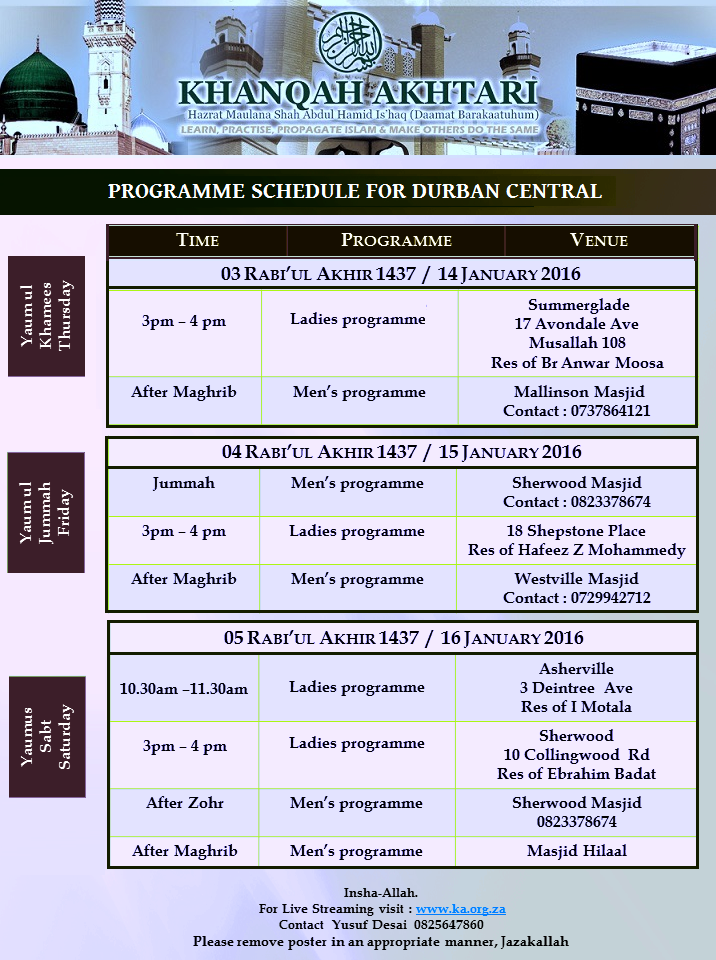 Dua to be read on a hot day

Hadhrat Abu Hurairah (Radhiyallahu 'anhu) narrates that Rasulullah  ﷺ  is reported to have said:
“When it is an extremely hot day, Allah Ta’ala turns His attention to the people of the skies and the earth. The moment a person recites the following Dua, Allah Ta'ala says to Jahannam: ‘Indeed, a servant of mine has sought refuge in me from you, now you bear testimony that I have granted him salvation from you.'"
[Bayhaqi Vol.1 Pg.411] 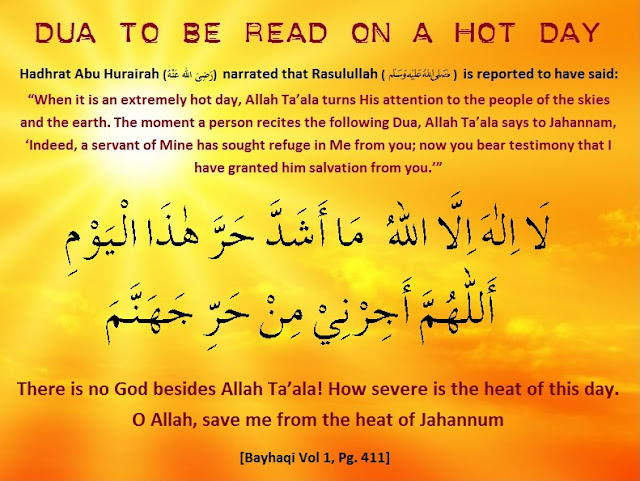 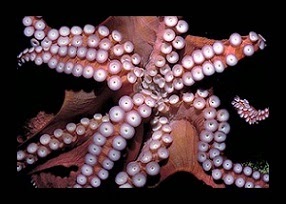 We are living in such times, where we see the words of Rasulullah (Sallallaahu ‘alayhi wasallam) in regard to the end of this world, becoming a reality, with each passing day. Rasulullah (Sallallahu ‘alayhi wasallam) said about the signs of the final day: “Signs following one another like the pieces of a necklace falling, one after the other, when its string is cut.”[1]

All around, we see the manifestation of the signs of Qiyamah. Some – as mentioned in different Ahadith – are: natural disasters will increase, time will pass swiftly, afflictions will appear, massacre, bloodshed and killing will increase, the murderer will not know as to why he has killed and the slain will not know as to why he has been murdered, the widespread prevalence of music and adultery, women will be naked in spite of being dressed, children will be disobedient to their parents, great injustice will fill the earth, etc.

There are just waves and waves of darknesses hitting mankind – in the form of various tribulations and trials. And man is in a state of self-destruction due to his indulgence in sins.

Having read an interesting article on the octopus, an analogy came to mind, considering the Fitnahs this Ummah and all of mankind are facing.

Like a giant venomous octopus spreading its eight arms, the forces of evil are spreading throughout the world. Via the media, evil spreads speedily and instantly in all directions.

It is said that an octopus releases a thick cloud of black ink to confuse its predators. We find that these forces of shaytaan spread darkness to confuse all of mankind.

Shaytaan is man’s open enemy – so when it comes to the destruction of man, there is no mercy.

Allah Ta’ala warns and cautions us:

It is also said that this black cloud of ink has a special substance that dulls senses. Similarly we find that these Fitnahs and these “Isms” dull the spiritual senses. …As an example: Today, music is accepted, by perhaps the majority of Muslims, as entertainment and relaxation – whereas, it is Haraam and it only nourishes Nifaaq (hypocrisy) in the heart. This is darkness that spreads in the heart. It not only dulls Roohaaniyyat (spirituality), it destroys it.

Similarly, alcohol, drugs, gambling, interest taking and giving, adultery and every other sin clouds the spiritual vision and judgement and ‘numbs’ the soul.

With eight arms the octopus gains a firm grip over its prey. It gives a nasty bite and has poisonous and deadly saliva to subjugate and overpower its prey. It injects its prey in such a way that it paralyses it and then it dismembers and tears it into small pieces with its beak.

These Fitnahs and these sins and these false ideologies bite and paralyse Imaan. They poison the spiritual heart, sometimes fully destroying the person’s Imaan, and they dismember and tear apart the person's entire Dien. This is how shaytaan assaults and attacks.

As a result, we find that very sadly, the majority of mankind, have become blinded by these darknesses and have even become spiritually dead in the grip of these satanic “Isms”.

It is a known fact, that the octopus is not the king or master in the oceans. We have the great white sharks and we have the killer whales and other sea creatures that are known as apex predators. They are, by far, much, much bigger and stronger than the octopus. In fact, the octopus would not attack such powerful predators.

Like the octopus, shaytaan’s influence and his power are limited. Even though, his influence is evident, Allah Ta’ala informs us that his conspiracies and schemes are weak.

“Surely the plot of shaytaan is ever feeble.”

When we establish a strong connection with Allah Ta’ala, with obedience and submission to Allah Ta’ala’s Commands and we become the friends of Allah Ta’ala, then Allah Ta’ala protects from the mischief of nafs and shaytaan and from the Fitnahs that abound in the world.

“Verily, he (shaytaan) has no power over those who believe and put their trust only in their Lord (Allah Ta’ala).”
[Surah An-Nahl 16 : 99]

Allah Ta’ala’s Protection is with those who believe and trust in Him. Allah Ta’ala also grants spiritual strength to overcome and foil the plans and attacks of both nafs and shaytaan.

However, those who follow shaytaan, by engaging in sins and immorality, are the ones who become the victims and easy prey of shaytaan:

In these challenging times, we need to guard ourselves against these Fitnahs, by :

These are measures for our safety and Istiqaamah (steadfastness).

As Muslims, there is no losing hope. Imaan is the light of the heart and our guiding light. It is our torch as we walk through the darkness of this worldly life.

Practising on Dien is our shield and our fortress in these times when there is a great onslaught and ambush against Imaan and Islam. There is no tolerance shown to religion. All the Isms that circulate in the world are with the single objective of eradicating belief in Allah Ta’ala. This is the promise of shaytaan:

“Because You have sent me astray, surely I will sit in wait against
them (human beings) on Your Straight Path.
Then I will come to them from before them and behind them,
from their right and from their left, and You will not find most of
them as thankful ones (i.e. they will not be dutiful to You).”
[Surah Al-A’raaf  7 : 16/17]

Holding onto Dien, like how a drowning man holds onto a lifeline, will be our means of salvation, Insha-Allah.

May Allah Ta’ala grant us the understanding and the concern, that we take measures to protect ourselves and our families in these very dangerous times.