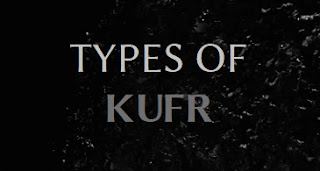 Five types of Kufr were discussed by Hadhrat Maulana Idris Kandehlawi (Rahmatullahi ‘alayh), which leave us with much to introspect regarding the spiritual condition of our own hearts. Each one of us needs to reflect where we stand, correct ourselves and make Dua for the protection of our Imaan; otherwise it is very easy to lose one’s Imaan. The Hadith mentions that a time will come when a person who was a Believer in the morning will become a non-believer by the evening, or he who was a Believer in the evening would become a non-believer by the morning.[1]

We should understand that in the Qabr there is only Imaan and Kufr. If a person leaves this world with Imaan, he has secured everything, and if he leaves with Kufr, then the consequences are most severe.

This Kufr is where a person falsifies and disbelieves in the essentials of Deen. Imaan-e-Mufassal covers all the essentials; seven fundamental beliefs:

If a person disbelieves in any one of these, he has committed Kufr. Very sadly, there are those who makes Salaah but they say that certain beliefs do not make sense to them and they cannot accept it … This too is Kufr. Our Imaan is on everything that Rasulullah Sallallaahu alayhi wasallam conveyed to us.

Imam Raazi (Rahmatullah ‘alayh) had given a comprehensive definition of Imaan; that it entails both acceptance with the heart and to attest with the tongue (i.e. Tasdeeq bil Qalb wa Iqraar bil lisaan). A person should make known that he is a Muslim. ...Of course, if the person is dumb, this will not be possible, but he could acknowledge in writing or in some other way. A person may also be under persecution and forced to say words of Kufr. He will be regarded a Believer so long as his heart is firm on Imaan.

When a person is interested in accepting Islam, we should explain to him Imaan-e-Mujmal and Mufassal. If the person accepts these beliefs, we should not delay in having him recite the Kalima. He should be made to say the Shahada immediately.

This is the Kufr of pride which shaytaan is guilty of. It is disbelief stemming from pride and arrogance even though the truth is known.

...The Sajdah, which was required from him, was not in the worship of Hadhrat Aadam (Alaihis Salaam); it was the fulfillment of Allah Ta’ala Command.

Then there were the Jews of Madina Munawwarah. They recognised Nabi Sallallaahu ‘alayhi wasallam as they would recognise their own sons. They, in fact, made Hijrah to Madina Munawwarah and settled there because they were expecting the arrival of Rasulullah Sallallaahu ‘alayhi wasallam. However, because he was not of the Jewish progeny and because he was of the Arab progeny; their pride prevented them from accepting. Not only did they reject, they were the cause of a great mischief. Allah Ta'ala mentions:

“…When there came to them that which they recognized, they disbelieved in it…”
[Surah Al-Baqarah 2 : 89]

The same pride was evident in the Mushrikeen of Makkah Mukarramah. They too rejected the message of Rasulullah Sallallaahu ‘alayhi wasallam, although they gave him the noble titles of Al-Ameen and As-Sawdiq.

…We learn that pride is such a dangerous quality that it does not allow a person to accept what is the truth.

In our times, there are many who, due to their pride, say: “Why must I listen to the Ulama?”/ “Who are they to tell me what to do?”  … Our pride prevents us from listening to the truth and accepting it.

If any Aalim is saying and doing the wrong thing, then indeed, one should not listen. However, there are the Ulama-e-Haq who are teaching Deen correctly; teaching what is Qur’aan Shareef and Ahadith. If on this basis, we say: “Why must I listen?” then this is indirectly saying: “Why must I listen to the message of Allah Ta’ala and His Rasul Sallallaahu ‘alayhi wasallam?” …How dangerous a statement!

If we belittle and mock the Ulama due to our pride and thinking of ourselves as superior, because of worldly wealth or worldly and secular education, then we should keep in mind that this was condition of the Munafiqeen (hypocrites), who considered themselves superior, and regarded the Sahaba-e-Kiraam (Radhiyallahu 'anhum) as foolish, and belittled them – Na’uzu Billah.

They considered the Sahaba-e-Kiraam (Radhiyallahu 'anhum) as people who were simple and with little knowledge; they saw them as gullible and just going along with whatever they were told. These Munafiqeen saw themselves as knowing more. Allah Ta’ala responded:

Not only did Allah Ta’ala label the Munafiqeen as fools, but also stated they were ignorant.

...May Allah Ta’ala save us from pride and arrogance.


To be continued, Insha-Allah.