The First Night of Rajab 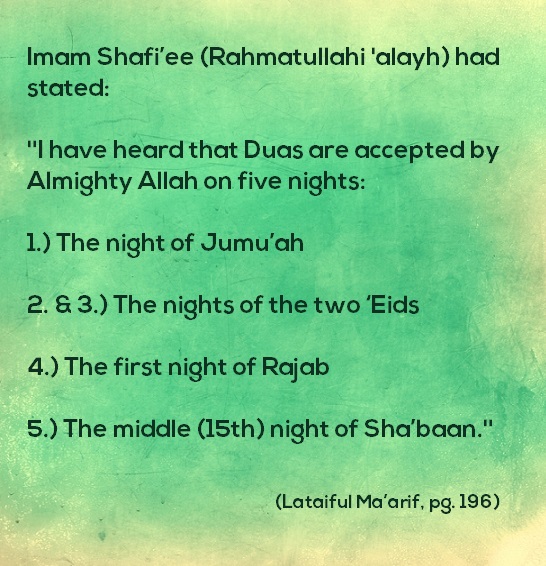 The Company of As-Sawdiq ﷺ 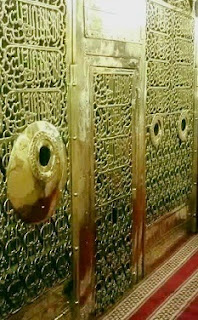 ALLAH TA'ALA has commanded us:

“O You who Believe, Fear Allah and join the company of the Truthful ones (the pious, the Auliya Allah).”
[Surah At-Taubah 9 : 119]

Our Sheikh, Hadhrat Moulana Hakeem Muhammad Akhtar Saheb (Rahmatullahi ‘alayh) had explained that the highest rank among the Auliya Allah (Friends of Allah Ta’ala) is that of the Sawdiqeen or Siddiqeen. Hadhrat Moulana (Rahmatullahi ‘alayh) had also presented a beautiful definition of a Siddique: Siddique is a mirror reflection of Nubuwwah. Subhanallah!

Allah Ta’ala instructs us to keep the company of the Sawdiqeen, the Truthful ones … because these are people who are truthful in their piety. They have the reality of piety. Their piety is not just an act or performance of piety. There is no pretence in what they say or do. Allah Ta’ala revealed the plural, ‘Sawdiqeen’, making known to us that there will always be such sincere servants of Allah Ta’ala, until the end of time. And it is through the blessings of the noble company of the Siddiqeen, that we will nurture the quality of Taqwa.

When Allah Ta’ala grants His Taufeeq, Fadhl and Rahmah, and man makes an effort, he can develop his relationship to a level of Sidq, where he is counted amongst the Siddiqeen. …The Ambiyaa (Alaihimus Salaam) were selected by Allah Ta’ala to convey His Message to mankind; so this quality of Sidq would naturally be inherent and characteristic in all of the Ambiyaa (Alaihimus Salaam), to a more exalted and lofty level. We find in the Qur’aan Sharief, that Hadhrat Yusuf (Alaihis Salaam) is described by the honourable title, “Siddique”:

Rasulullah Sallallaahu ‘alayhi wasallam was the embodiment of Sidq and was given the noble title of "As-Sawdiq" (The Truthful One). ...When Allah Ta’ala highlights the virtue and merit of the company of the Auliya Allah, how much more meritorious must it be to spend time in the company of Rasulullah (Sallallaahu ‘alayhi wasallam), from whom the Siddiqeen have acquired this Sidq!

Hadhrat Sheikh Abdul-Haq Muhaddith-e-Dehlawi (Rahmatullahi ‘alayh) had explained that the Messengers of Allah Ta’ala are alive in their graves, just as they were alive in the world. For them, life (in the grave) is a real, physical life, like they had in this world.

When we keep company with the pious, we hope to acquire, within our own hearts, their virtuous qualities. Whilst we are at the Raudha Mubarak, we should intend to imbibe and absorb the noble, beautiful qualities of Rasulullah (Sallallaahu 'alayhi wasallam) – for there is no person ever who can match the perfection that Allah Ta'ala had blessed His Beloved Rasul (Sallallaahu 'alayhi wasallam) with. His beauty, his character, his speech, his actions and his interaction with people surpasses and transcends all.

This opportunity of being in the company of our Nabi (Sallallaahu ‘alayhi wasallam) is a most exclusive and prized gift and tremendous favour for any Ummati and should be cherished and deeply appreciated. Do not let the stay in Madinatul Munawwarah go to waste – by being heedless and negligent of this unique opportunity of directly drawing the Anwaaraat and Barakaat that are found at the Raudha Mubarak, in the Suhbat of Rasulullah (Sallallaahu ‘alayhi wasallam).


Of course, to truly take benefit from our Ziyarah, we need to develop the love for Rasulullah (Sallallaahu 'alayhi wasallam). This, we can easily acquire from one who has sincere love, whose entire life is in conformity with the beautiful Sunnah and who will also teach us the etiquettes and demands of love, that we are able to present ourselves with humility and respect, value and cherish the opportunity, and take maximum benefit when in Madinah Sharief. We will draw these qualities from the hearts of the Ahlullah, the Lovers of Allah Ta’ala and Rasulullah (Sallallaahu ‘alayhi wasallam) and should thus avail ourselves of their noble company.

Allah Ta’ala accepted them to be buried beside Rasulullah (Sallallaahu ‘alayhi wasallam). Hadhrat Abdullah Ibn 'Abbas (Radhiyallahu ‘anhu) had said: “Every person will be buried in the soil from which he was created.”[4] …SubhanAllah! How extremely special Hadhrat Abu Bakr and Hadhrat Umar (Radhiyallahu ‘anhu) are, to have been created from the earth, which houses them with the Beloved of Allah Ta’ala (Sallallaahu ‘alayhi sallam)! Indeed, they were the closest to him in life and are closest after their demise. In this, Allah Ta’ala also perpetuated for them, the bounty of Suhbat and nearness to Nabi (Sallallaahu ‘alayhi wasallam). SubhanAllah! What great honour and acceptance!

When we reflect over all of this, we feel a sense of deep shame that despite our unworthiness – and we are indeed undeserving of this bounty – Allah Ta’ala allows us such close proximity to these great personalities. This is only Allah Ta’ala’s Karam. At the same time, we should hope that when Allah Ta’ala has accommodated us with such a visit, that we leave, having taken benefit from their blessed company.

May Allah Ta’ala grant us life and death in the company of His lovers! Indeed, this is honour in both worlds! 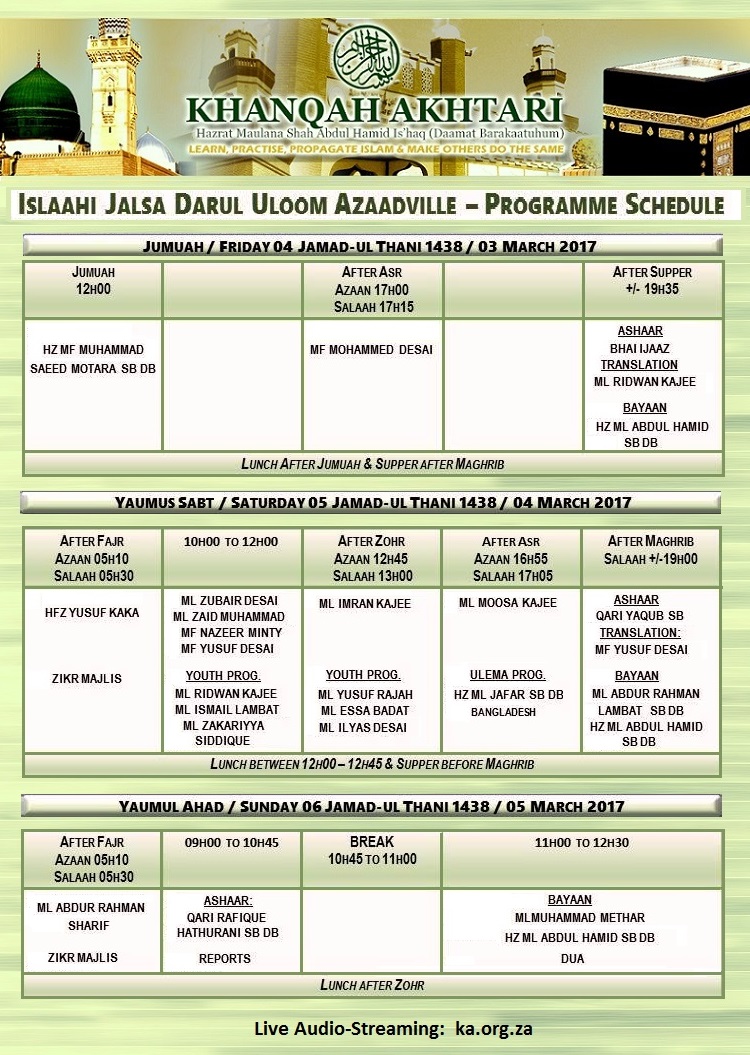 Programmes are subject to change without prior notification