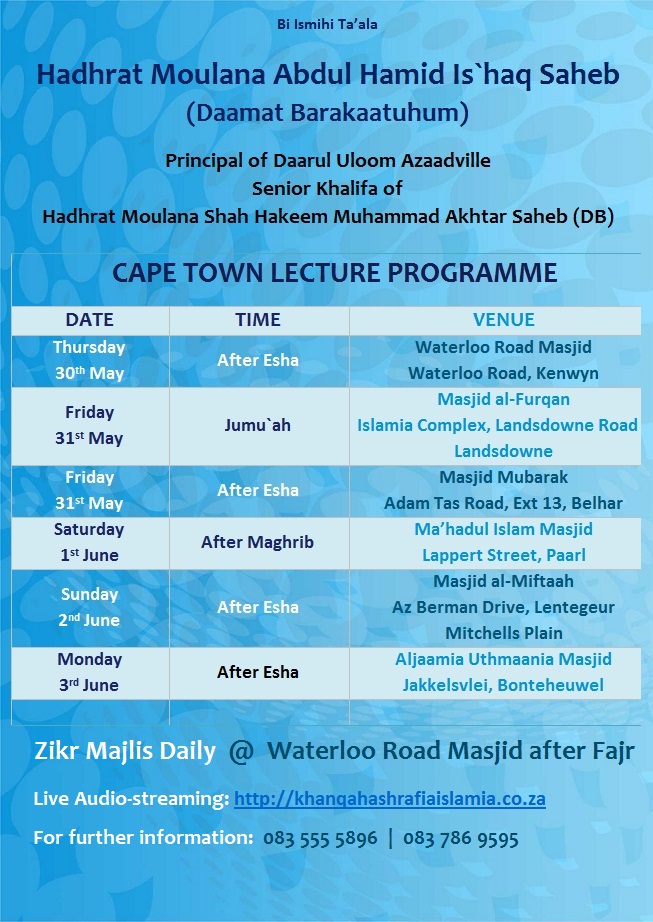 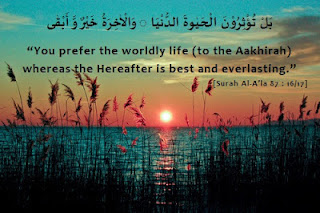 “Believe as the people have believed (i.e. the Sahaba-e-Kiraam)…”

The Sahaba-e-Kiraam (RA) set a unique and outstanding precedent for all of mankind – of submission, obedience and sacrifice, for Allah Jalla Jalaaluhu, His Nabi (Sallallaahu ‘alayhi wasallam) and His beautiful and perfect Dien.

They were always conscious of the reason behind their existence and their objective in this worldly life.

Allah Ta’ala has informed us all of the purpose of creating us:

“And I created not the Jinn and Mankind except that they should worship me.”
[Surah Zariat 51 : 56]

The Sahaba-e-Kiraam worked to achieve the Pleasure of Allah Jalla Jalaaluhu through different Ibaadaat, and in this manner, secured Aakhirah (the Hereafter). Their entire lives thus passed in Dien. They worked single-mindedly and tirelessly in pursuing the Aakhirah.

Dunya took a secondary place in the lives. They lived in the world; they made use of it; but they did not make it their goal, because they knew that they would soon be leaving it behind them.

They had, before them, the beautiful example of Rasulullah (Sallallaahu ‘alayhi wasallam), who had explained the relationship we all have with this world, saying: “What have I to do with this world? I and this world are as a rider that takes shelter/shade beneath a tree. Then he goes on his way, and leaves it behind him.”

Sadly, our downfall and failure is that we have made Dunya, our objective, whereas our purpose whilst living in this world, should be Dien.

We are caught up with the fashion, sport, trade, politics, entertainment, etc. of Dunya, and then we take out time for Dien. And we consider ourselves pious, based on the time we take out for Allah Ta’ala. …This is not piety. This is far from piety.

Sometimes, there is an obsession of Dunya’s activities and no time is given to Dien. Hubbud Dunya consumes the heart, and this easily leads to the destruction of one's Dien and Aakhirah, if no effort is given towards reformation and Islaah.

Our whole life – everything of it – should be for Dien, and then we take out time for Dunya – for the necessities of Dunya. Dien takes precedence. Dien is priority. Dunyawi occupations are secondary and are undertaken and carried out because they need to be done and have to be done.

Our endeavour is to believe as the Sahabah (RA) believed, emulate them in their noble exertion for Dien and Aakhirah and of course, ultimately – the Pleasure of Allah Jalla Jalaaluhu.

Preparations have to be made here, if we want to live happily, there. This is intelligence.

Nabi (Sallallaahu ‘alayhi wasallam) said: “The intelligent one is he who suppresses his desires and practises for what is after death, and the foolish one is he who makes his nafs follow its desires and (he) places (baseless) hope on Allah.”[2]

Programme for the Islaahi Jalsa 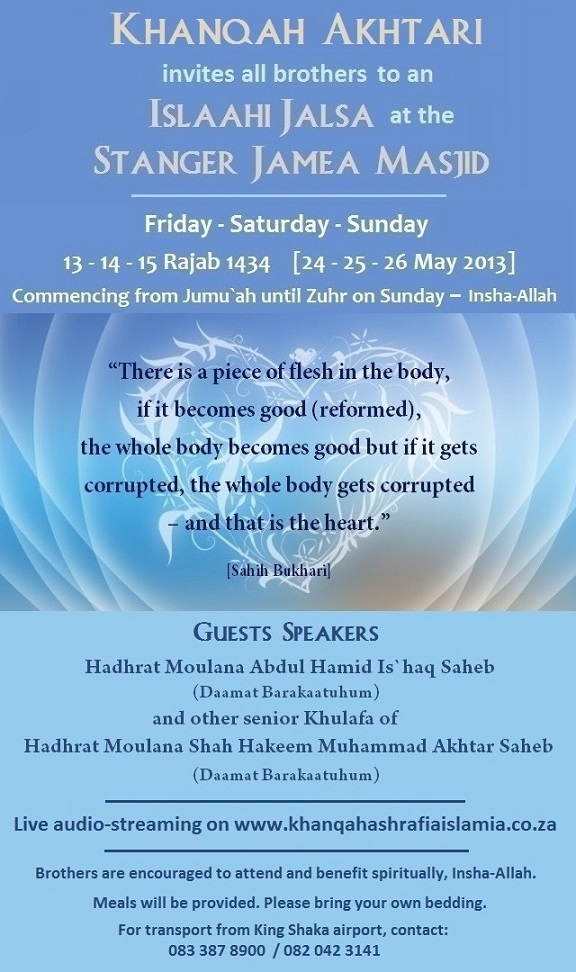 We hear of many incidents where people who are deendaar (religious), who, while engaged in some Dieni Khidmat, or in Ibaadat, or in some good works, become victims to hijacking, robbery, loss, etc.

Some people then question: How could this happen while he / she was engaged in Ibaadat?

There is no doubt that every good deed has its benefits as well as offers us protection: Salaah, Zakaat, Sadaqah, Tilawat, Du’aa, Durood Shareef, Hajj, Umrah and the various other Ibaadaat, as well as the many wazaa’if we read, offer protection from various kinds of harms and trials – as has been mentioned in different Ahaadeeth.

However, the question: ‘How could this happen?’ makes evident our naiveté and ignorance, and even exposes our weakness. People even ask: Why me? And they even say that they cannot understand because they are reading their Salaah, even waking up  for Tahajjud.

Sometimes such questions are even asked by people, to disprove the promises and benefits made by Allah Ta’ala and His Rasul (Sallallaahu ‘alayhi wasallam).

While many focus on their piety and good deeds, they fail to give any thought to the many actions which are carried out, which nullifies the benefits, the protection and the rewards that follow on Ibaadat, Khidmat of Dien, etc.

Sometimes, it is our sins that block the effects of our A`maal (deeds).

So even though the person is reading Aayaatul Kursi diligently after every Fardh Salaah, if he is also engaged in some sins, then the powerful effect of the Ayaatul Kursi is barred or obstructed by those sins. …Perhaps the person is harbouring suspicions and bad thoughts about people, or he is venting unwarranted anger on his wife or his parents, or his Salaah is performed carelessly and hastily, without fulfilling the requirements and the postures of Salaah, or the person is casting lustful gazes, engaging in gheebat, speaking lies, and so forth.

These are all sins – which we sometimes do not even recognize as sins – and this then blocks the effects of the good we do.

So this is what we should think when it comes to adverse conditions that befall us: That it is probably our sins which have caught up with us; that this is the consequence of our disobedience.

Rasulullah (Sallallahu ‘alaihi wa Sallam) said: “A person is deprived of his provision due to his sins.”
[Ahmad]

We should thus do a little introspection at such times, identify our sins, sincerely repent, and make amends where we can – whether in regards to the Rights of Allah Jalla Jalaaluhu or the rights of creation.

Before he could take the matter further, his received his fines; not for going through a red light, but for not having his seat belt on!

Similarly, often, we think we are doing all the right things, that we are “perfect”, but Allah Jalla Jalaaluhu's Sight is on every single action of ours: our beards, trousers above the ankles, our eyes and gazes, our hearts and minds, what we are thinking about and planning, on our jealousy, hatred, back-biting, and so many other weaknesses and sins. We should not consider that we are so righteous and pious, as we imagine ourselves to be. We do not know where we are seriously faltering.

Rasulullah (Sallallaahu ‘alaihi wasallam) said: "A Muslim is not afflicted by hardship, sickness, sadness, worry, harm, or depression - even if pricked by a thorn, but Allah expiates his sins because of that."
[Bukhari and Muslim]

In another Hadeeth, Hadhrat Abu Hurairah (RA) related that Rasulullah (Sallallaahu ‘alaihi wasallam) said: "Hardships continue to befall a believing man and woman in their body, family, and property, until they meet Allah (Jalla Jalaaluhu) burdened with no sins."
[Tirmizi]

And for some, Allah Ta’ala has a high position fixed for them in the Aakhirah (Hereafter). The person is unable to reach that high position with his actions alone. These conditions of adversity, loss and hardship, and the patience (Sabr) he exercises, becomes the means whereby he secures those high stages.

When it comes to the calamities which befall others, we should maintain husne zan (a good opinion) that their tests and trials are a favour and mercy, to secure them high stages in the Aakhirah.

However, in all conditions, the Believer is recipient to Mercy: If it is a punishment for sins, there is mercy – because Allah Jalla Jalaaluhu wants us to turn to Him, to make sincere Taubah and secure His Forgiveness.

Tests and trials are thus a means of Taubah and Forgiveness, or a means of purification of our sins; otherwise an elevation of ranks.

May Allah Jalla Jalaaluhu give us the understanding, and give us the Taufeeq of Taubah, Tafweez, Tasleem and Ridha bil Qadha. 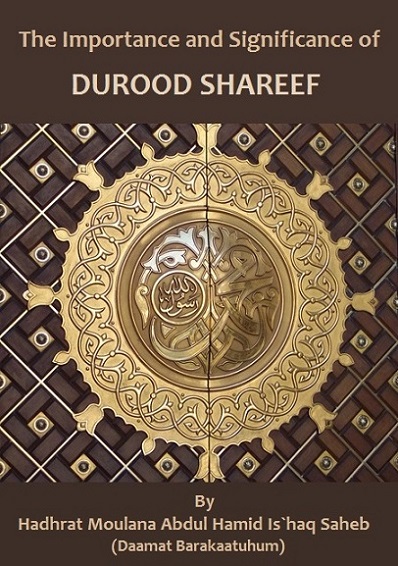 One very great Ibaadah that Allah (Jalla Jalaaluhu) has blessed this Ummah with, which is an enjoyable and pleasurable Ibaadah, is the recitation of Durood Shareef and sending Salawaat upon Nabi (Sallallaahu 'alaihi wasallam).

For example, one person is a labourer and has to fulfil many chores, like digging holes, etc. Another person works in an air-conditioned office, in comfort, and has light and easy tasks to fulfil. yet he takes a huge salary.

Similarly, there are two paths of Dien. The one path is that which consists of lots of Mujahadah (striving and effort) and the other is to work a little, but receive great rewards in return.

One of the types of the latter path is the recitation of Durood Shareef. This is such an Ibaadah that can be done in the total comfort of one's home. A person should let the meter of his Durood Shareef run in the comfort of his home and thereby become the Muqarrib (close servant) of Allah (Jalla Jalaaluhu).