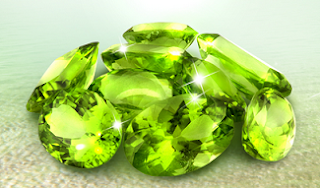 If a person is blessed with the great quality of Tawakkul (placing his trust in Allah Ta’ala), he will be freed from the anxieties and worries of Dunya.

Indulgence in sins is ‘painting’ one’s heart and life red with the flames of Azaab (punishment).

We are seeking medication in the poison of sins; seeking solutions to our problems in sins, and searching for way out of our difficulties but locking all the doors of escape with our indulgence in sins.

The medication is Sincere Taubah from all sins; the solution is obedience to Allah Ta’ala and His Rasul (Sallallaahu ‘alayhi wasallam); and the way out is Taqwa (abstinence from sins). 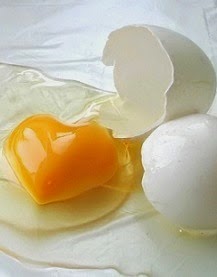 On one occasion, I was sitting in the kitchen at home and Aapa was breaking eggs and frying them. To my surprise, the eggs were being broken directly into the frying pan.

It came to mind that it was not long ago that when we broke an egg, we would break it in a saucer or a bowl, because it could come out rotten. Thereafter, we would put it into a frying pan. If there had been one rotten egg broken directly into a frying, which already had five or six eggs, all would be spoilt.

…Such machines have been manufactured whereby eggs can be tested and the rotten eggs can be identified. We now buy a tray of eggs – 30 eggs – and there is not one rotten egg. In previous times, we expected to find two or three bad ones.

An interesting article mentioned the high standard established in the processing and packaging of eggs. This includes cleaning and washing the eggs, drying them and grading them.

Eggs are graded based on both their interior quality and their exterior quality. In a dark room, light is shined onto the eggs, to grade them, or the eggs are passed over bright light. This is termed as candling, whereby the interior of the egg can be seen. A person, who has experience in the field, is able to gauge the inside condition of each egg with this light.

On the outside, the egg is examined in its appearance - for cleanliness, texture, an uncracked shell, etc. Accordingly, it is graded as 1 or 2, or Grade AA or A or B.  Broken eggs are discarded.

…In these days, we also find that the rice we purchase is clean and polished. I was present at a Nikah where the brothers were doing the cooking using dhegs. I observed how they just slit open the plastic bags and emptied the rice into the dheg. …So now there is no cleaning and washing of rice. There are no stones, grass and twigs that have to be removed anymore. So much effort on rice and so much effort on eggs have been made - in fact on all food products. Man has established a grading system for the food industry whereby meat is graded; tea, coffee, fruit and vegetables and all other foods are graded.

In the domain of education, business, travel, holiday and other worldly work and activity, man places great importance on grading and rating. Sadly, man makes no real effort on himself - on his heart and on his soul. He improves, develops and upgrades everything else except himself.

If man is rated in stars – like how he rates hotels, restaurants and other places, then perhaps the majority of us would be conferred a zero star. If we are rated from A-Z, we will receive the lowest grade – because we find such rotten hearts and bad characters.

There are some ‘rotten’ spouses – and as a result every other Nikah ends in failure. There are many children who are a clear sign of Qiyamah; children who disrespect, trouble and physically, emotionally and mentally abuse their parents. Some parents describe their own children as a curse, whereas children were meant to be blessings and mercy.

We have all kinds of criminals, tyrants, oppressors walking the face of the earth – and causing so much of harm and injustice to the creation – to human beings and to animals! They are in the form of human beings but have no humanity, no mercy, no compassion … as if they don't possess hearts.

Very sadly, there is no end to the complaints about man.

In the time of Nabi (Sallallaahu ‘alayhi wasallam), the effort was made on man. Things were not advanced like what we find today, but man was advanced… advanced in his character, morality, virtue and ethics.

Rasulullah (Sallallaahu ‘alayhi wasallam) asked: “Do you know him?”

Hadhrat Jibra`eel (‘Alaihis Salaam) replied: “Abu Dharr is more famous amongst the angels in the heavens than he is in Madinah.”

When asked how Hadhrat Abu Dharr (Radhiyallahu ‘anhu) had gained such fame, Hadhrat Jibra`eel (‘Alaihis Salaam) responded that he had two qualities in him that were most beloved to Allah Ta’ala: He would recited Surah Al-Ikhlaas in abundance and he thought nothing of himself. He had the quality of Tawaadhu (humility) and Abdiyyat (servitude).

This was the effort made on man which then made him famous in both worlds. Allahu Akbar!

From Allah Ta’ala’s side, there is also grading! The Sahabah-e-Kiraam (Radhiyallahu anhum) were tested and they were graded. Allah Ta’ala gave them the certificate of:

They are of such a superior grade that we have been directed to also develop the qualities of the Sahabah-e-Kiraam (Radhiyallahu anhum) :

If we do so, we will, Insha-Allah, make the grade for Najaat (salvation) and Jannah (paradise)!

Allah Ta'ala also mentions that He will grade us according to His Friends if we tread the path of obedience and work towards developing Taqwa. We will be graded with the Ambiyaa (Alaihimus Salaam), the Siddiqeen (Truthful), the Shuhadah (Martyrs) and Sawliheen (Righteous), Insha-Allah. And what honour this is!

“And whoever obeys Allah and the Messenger, then they will be with those on whom Allah has bestowed His favor – the Ambiyaa (Messengers), the truthful, the martyrs, and the righteous…..”
[Surah An-Nisaa 4 : 69]

This is the success that follows on Islaah (reformation) and Tazkiyah (purification). Allah Ta’ala states:

Allah Ta’ala also grades those who transgress all bounds – as the lowest of the low or worse than animals.

They are like cattle, nay even more astray; those! They are the heedless ones.
[Surah Al-A’raaf 7 : 179]

These are the ones who don’t make the grade for Najaat and Jannah. They return to Allah Ta'ala with the burden of injustice - of Kufr, Shirk and other major sins. They, themselves, broke their relationship with Allah Ta'ala and they allowed the rot of Kufr and Shirk to destroy their hearts and souls. ...Their souls are thus discarded to Jahannum.

May Allah Ta’ala protect us from such a miserable fate.

In the same vein, we should grade and rate our own hearts before our hearts are graded and rated by Allah Ta’ala.

Let us not waste time in developing this heart and making it worthy that it can be graded with the Friends of Allah Ta’ala!

If we were to assess the Ummah today, then very sadly, the condition of the Muslim is not a praiseworthy condition. Our characters do not portray the character of Rasulullah (Sallallaahu ‘alayhi wasallam). Our dealings do not depict Islam’s noble teachings. We have become, in the words of Rasulullah (Sallallaahu ‘alayhi wasallam): “…You will be froth and scum like that carried down by a torrent (of water)…”

What value does froth and foam have? No value…

Why is this description given? …Because of the poor and bad condition of our hearts and souls!

Rasulullah (Sallallaahu ‘alayhi wasallam) mentioned two weaknesses in this particular Hadith: Love for the world and dislike for death.

And indeed, the love of this world is such a sin which give rise to many more sins.

On the outside, there are so many sins: gambling, fraud, interest, adultery, drugs, Gheebat, lies, etc. Our dressing is in emulation of the Kuffaar – on the style of Hollywood and Bollywood – with no resemblance to our Beloved (Sallallaahu ‘alayhi wasallam) and his noble companions (Radhiyallahu ‘anhum).

The beard – which should be kept one fist length, and which is Waajib (compulsory) – is not to be seen. Our Sheikh, Hadhrat Moulana Hakeem Muhammad Akhtar Saheb (Rahmatullahi ‘alayh) would say that just as the awe and beauty of a lion is in its mane, so the awe and beauty of a man is in his beard! The lion does not seek to look like its counterpart, the lioness (who has no mane) – but how sad, that man chooses to look more female than male – by removing this great Sunnah, which is the Sunnah of all the Ambiyaa (Alaihimus Salaam)!

Sometimes, as a customary practise we say ‘Astaghfirullah’ and ask Allah Ta’ala for forgiveness – only to return to our sins. If we have wronged some person, we sometimes superficially ask for Maaf – with no sincerity and reality – and we go back to causing harm and hurt. Sometimes, we apologise and show humility, seeking praise. …There is a myriad of diseases in our hearts. There is jealousy, hatred, anger, Ujub (vanity/conceit), Riyaa (show/ostentation), the love of this world, and so much else. …Our hearts are in a distressing state.

In grading us, Allah Ta’ala examines both the inside and outside. The heart has to be sound and clean (Qalb-e-Saleem) and the outside must be in conformity with His Beloved (Sallallaahu ‘alayhi wasallam) – in deed, character, dressing, etc.

Wallah, if we make our Tazkiyah – we purify our hearts and we purify our souls –we will enjoy great blessings and bounties, even in this worldly life.

When a person achieves Tazkiyah, what goodness is reaped! What success is achieved!
Within the inner self, there is joy.

An example comes to mind:

If the heart is clean, then just one drop of Noor will brighten and illuminate the person’s life – will be a means of brightening not only this dark, worldly life, but also the darkness of the grave and the darkness on the Day or Resurrection. Not only will his life be brightened, but all who come in contact with him, will benefit from this brightness. They too will find their hearts illuminated, Insha-Allah. 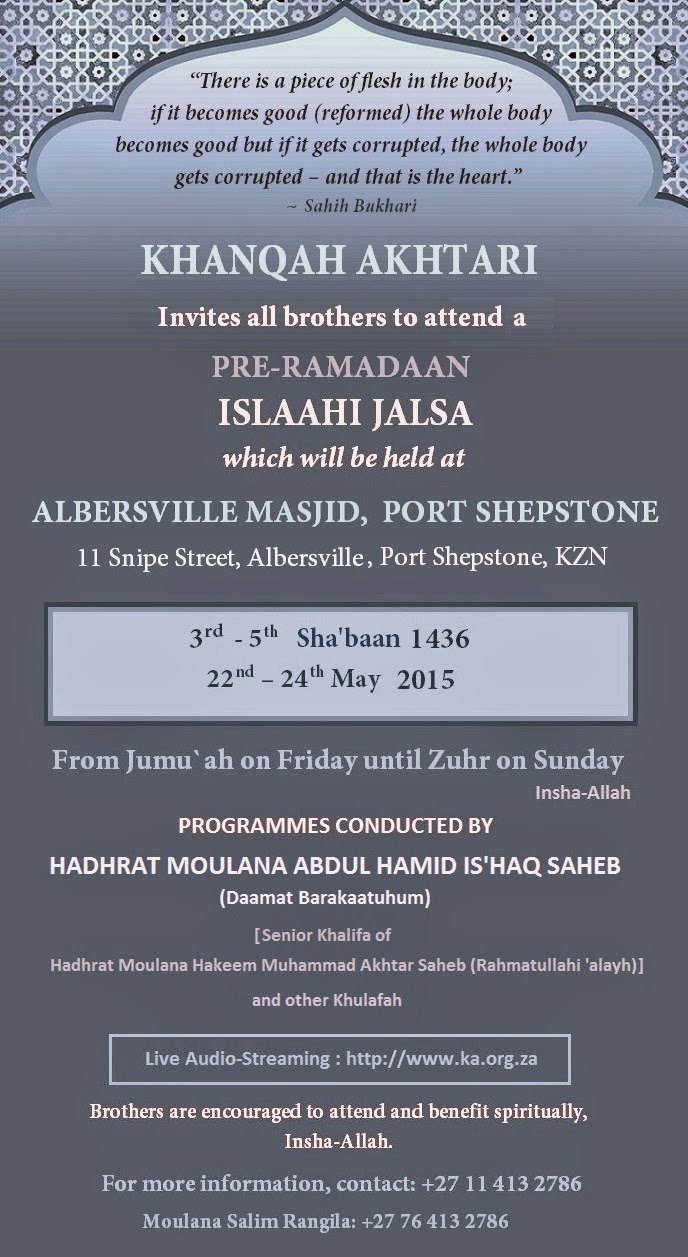 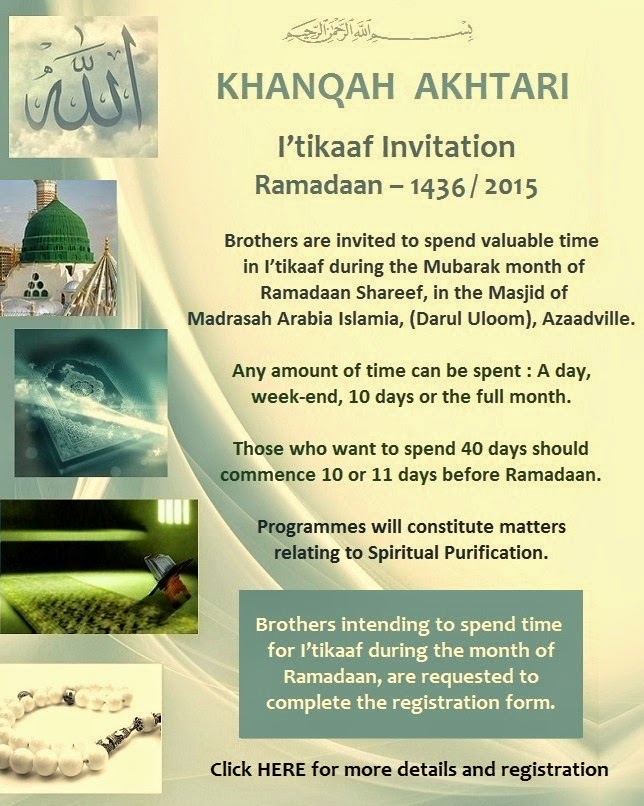 Tarjuma of the Qur`aan Sharief, from the Juz of the previous night’s Taraweeh.

Ta’leem and lessons in Tajweed

Discourses on spiritual nurturing and upliftment.