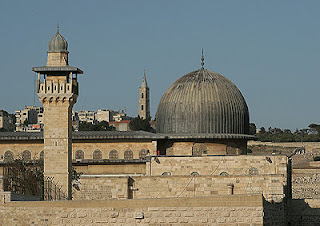 The whole world and particularly Muslims are overtaken by heart-ache, grief, distress and outrage at what is happening in Palestine, and what has been happening for so long now.

In the 1960's, Hadhrat Moulana Muhammad Umar Palunpuri (Rahmatullahi ‘alayh), on visiting Baitul Maqdis (Muqaddas) with his Jamaat, and seeing the conditions there, repeatedly stressed the importance of the Sunnah and the need for the Sunnah to come into our lives, for us to draw the unseen help of Allah Jalla Jalaaluhu! Hadhrat Moulana re-iterated that if no effort is made in this noble direction, then this blessed Masjid – Masjid-e-Aqsa – will not remain in the hands of the Muslims!

Unfortunately, our present state is that both our outward and inward are lacking. How can we then draw the Mercy and Help of Allah Jalla Jalaaluhu, when we are so careless and heedless regarding our Dien?

We should thus all take the first step of making our ‘Zaahir’ (outward / external condition) conform to the Sunnah. Our dressing, conduct and all actions should be according to Sunnah. The outward MUST correspond to Sunnah. Together with this, there should be concern and effort on the heart and soul. We should make Dua: ‘O Allah, make my inner-self better than my external/apparent and make my external, righteous.’ – Sunan Tirmidhi

If only we, as Muslims, can take understanding that the solution is to return to the obedience of Allah Jalla Jalaaluhu, return to the Masaajid and to the teachings of the Qur’aan and Sunnah. If we make an effort in this direction, we will be on the superhighways of success. We will easily be able to overpower all nations and people of the world. We do not require rockets and military arsenal to defeat them. We require Taqwa.

Hadhrat ‘Umar (Radhiyallahu ‘anhu) had written to the Commander of the Muslim Army, Hadhrat Sa'd ibn Abi Waqqaas (Radiyallahu anhu) and his army. His advice is most applicable and pertinent to us as well:

The Muslims will be helped due to the disobedience of their enemy to Allah, otherwise we would not have power over them, because our number is not the same as their number, nor is our preparedness/artillery like theirs. So if we are equal to them in sin, they will have superiority over us in power, otherwise we will triumph over them due to our refinement and virtue over them. We will not defeat them with our power and might.”

If we want to liberate the Palestinian people and protect Masjid-e-Aqsa, all of us will have to work towards establishing Islam in our lives. …The solution is not in marches, rallies, protests, demonstrations, etc. – where we easily fall into sins and compromise on our Dien; nor in handing over memorandums, nor calling upon the United Nations or other so called super-powers for help. They are not allies of the Muslims; they wish for the destruction of the Muslim Ummah.

A person may consider that by marching and protesting and waving flags, he or she is present for some good cause, but are we present for our Salaah, 5 times a day, in the Masjid? Because if we cannot be present for Salaah, then being present for a march only exposes our hypocrisy.

Instead of giving up our sins, obeying Allah Jalla Jalaaluhu and following Rasulullah Sallallaahu 'alayhi wasallam, we are seeking solutions outside of our Dien. These methods and measures have no roots in our Dien. We will not read in any Kitaab that Rasulullah Sallallaahu ‘alayhi wasallam and his noble companions (Radhiyallahu ‘anhum) – who were greatly oppressed and persecuted - prepared for mass marches, calling for all, including women, to come out, protest and demonstrate.

We have adopted these superficial means, which we take from the disbelievers, which have time and time again proven to be futile. Throughout the world, people are marching for different causes but where is the real change and solution? Some empty promises and cursory attention may be given but no significant solutions. In the United States, they have a movement for ‘Black Lives Matter’, with so many protests and marches, but there is still no end to the injustices, discrimination and unwarranted killings. Similarly, the western women’s movement adopts the same means to fight for their so-called rights, but they are more oppressed than ever. They are just deluded and duped into thinking that they are making some headway in achieving freedom but they become more and more enslaved.

A great disservice to Islam and the Muslims is an advert – ‘an emergency appeal’ - from an ‘Islamic organisation’, soliciting funds to support the people of Palestine. The advert depicts the Dome of the rock in the forefront and Masjid-e-Aqsa in the background. This itself, is a long-standing effort of the Zionists, to get Muslims to accept the Dome of the Rock as Masjid-e-Aqsa, which they are even prepared to give to the Muslims, while they take full possession of the actual Masjid-e-Aqsa!!

Very sadly, this organisation is tactlessly doing the very dirty and horrible work of the zionist jews; worst of all, in the name of Islam … and from those who are to represent and protect Muslim interests. To heap insult on injury, the advertisement is designed as a kind of caricature / cartoon. When the hearts of Muslims are bleeding and burdened with dreadful pain, such a kind of cartoon presentation is rubbing salt in an open wound or twisting the knife in the wound. …To what low levels have we sunk to, that we can see a severe tragedy and catastrophe in the Ummah, from the perspective of a cartoon?

Whilst soliciting funds for the relief of the Palestinian people is a noble cause, no doubt - but there is not a word regarding the protection of the first Qiblah and third Haram of the Muslims. Surely our Dien and this sacred Masjid and Haram takes precedence. Our lives and wealth should be sacrificed for our Dien and the Shi’aar (salient features / landmarks) of Dien, which includes Al-Aqsa.

Allah Ta’ala has blessed us with such a weapon – Dua. Hadhrat Moulana Hakeem Muhammad Akhtar Sahib (Rahmatullahi ‘alayh) would say that Dua – with Yaqeen – is more powerful than atom bombs. But we are found wanting when it comes to what are the solutions. The Sunnah also directs us towards Qunoot-e-Naazila, but then we are not in the Masaajid to participate in such a great and momentous means of drawing Allah Ta’ala’s Help!

It seems that Dien and Duas have little significance to the majority of us - almost as if no importance is given to what Allah Jalla Jalaaluhu and His Rasul Sallallaahu 'alayhi wasallam have commanded. ...Like the governments had religion as the last thing of importance in their lockdown levels, which would have been the status quo had religious people not opposed that, we too seem to do the same. As upholders and representatives of Islam and the Muslims, we should never relegate Dien to the lowest level. There is a repeated call for the Masaajid to be closed, insistence on social-distancing, etc. but our double-standards are exposed when we thereafter call for people to come out on the streets to march and demonstrate, where there is no social distancing, no precautions, etc.

With our bodies, hearts, souls and wealth, we should support Masjid-e-Aqsa and the Palestinian people. We make Dua and appeal to all to do the same and do whatever we can, within the boundaries of the Shari’ah. However, we cannot remain oblivious of reality and the real causes of things that unfold. We need to understand and re-direct our energies to those actions which invite Divine Support. We will have to return to the Qur’aan and Sunnah.

May Allah Jalla Jalaaluhu have Mercy upon the Ummah of Nabi Sallallaahu alaihi wasallam, guide us and assist us and alleviate the difficulties that are being faced!

Deliverance for the Suffering Ummah