The Enemy Within Us 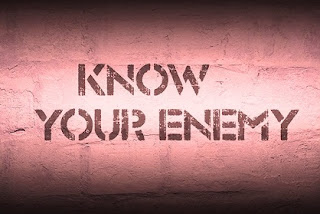 
There was an interesting and unique point which was made by Moulana Ibraheem Dewlah Saheb. It is something that makes us more conscious and mindful of how important it is to have true, genuine and sincere Imaan, as well as how important it is to have the quality of Abdiyyah (servitude). It is not meant to make us despondent; rather it is to make us alert as well as attentive to the condition of our Imaan and the true nature of our nafs.

Moulana explained that with Imaan and with Yaqeen (conviction), there can be Kufr. We may ask: How can there be Kufr when there is Imaan? …We have the example of shaytaan. At one time, shaytaan was in Jannah. He saw Allah Ta’ala and he saw the angels. He lived in the world that is unseen to us. So he has an exceptional level of Imaan and Yaqeen on the Dhaat (Being) of Allah Ta’ala and on Aakhirah. He also has the Ma’rifah (recognition) of Allah Ta’ala. Despite all of this, he committed Kufr. Allah Ta’ala mentions:

“And when We said to the Angels: ‘Prostrate before Aadam’; so they prostrated, except for Iblees. He refused and was arrogant and became of the disbelievers.”
[Surah Al-Baqarah 2: 34]

At that time, there was no other shaytaan to mislead him. What was the cause of his Kufr? ...The cause of his Kufr was his nafs. His own nafs led him astray and he rejected the Command of Allah Ta’ala. From this incident, we can see how the nafs is our worst enemy; worse than shaytaan, himself. Rasulullah Sallallaahu ‘alayhi wasallam informed us: “Your worst enemy is your nafs, which lies between your sides.”

Each one of us has to contend with the enemy of nafs, but unfortunately we have not identified it as enemy number one, and often we choose to follow the dictates of the nafs over the Command of Allah Ta’ala.  …Whilst we should not ask for any tests, we don’t have to wait for big tests to see whose command we follow. Small tests prove whether we are dominated and overpowered by nafs or not; small tests establish whether we are in the obedience of Allah Ta’ala or in the obedience of the nafs. As an example: It is winter presently and very cold in the early morning. The Azaan goes for Fajr Salaah; perhaps our alarm rings so that we wake up in good time, but the nafs desires comfort, warmth and sleep. The nafs will persuade: Ten minutes more. …We switch off the alarm, pull the blanket over and go back to sleep. And when we wake up, not only was the Jamaat Salaah lost to us, but the sun had risen and the Salaah is Qadha. We listened to our nafs; we followed through with the instruction of the nafs; we appeased the desire of the nafs for more sleep; at the cost of Allah Ta’ala’s obedience and pleasure.

…When we step out of the house, do we lower our gazes from strange women? This too is a test. Do we please Allah Ta’ala or do we please the nafs? At the time of our Nikahs and Walimahs: Do we seek Allah Ta’ala’s Pleasure or do we appease the desire of the nafs for name, fame, praise, etc. and get caught up in photography, music, lavishness, wastage and other Haraam?

We know that zina (fornication/adultery), gambling, riba (Interest), music, drugs, etc. are Haraam, but we still move in that direction. Why? …Because we have not recognised the nafs as our enemy and have placed ourselves in the slavery of nafs; whereas the nafs is meant to be in the slavery of Allah Ta’ala. We are supposed to be strong against the nafs, but we choose to be weak and meek against the nafs. Allah Ta’ala says:

Yet, it is this same nafs, which, if left un-restrained and free, will be a source of misery, in  both worlds.

What we have to do is:

That is, we must believe in Allah Ta’ala and follow His Commands. We must not follow anyone else's commands or orders. Pleasing ones nafs, trying to please people, etc. is doing for others besides Allah Ta’ala. …Is this then not a form of Shirk?! May Allah Ta’ala protect us all.

So this is an effort and Mujahadah (striving) that we all have to make against our nafs …each and every one of us. We have the courage but we need to make use of it. Unfortunately, we are ‘feeding’ and spoiling the nafs all the time and depriving the Rooh (soul) of its nourishment, which is the ‘Ibaadaat of Allah Ta’ala and obedience to Allah Ta’ala. The nourishment of the Rooh is Taqwa. Taqwa makes the Rooh strong and when the Rooh is strong it overpowers and subdues the nafs. The nafs then becomes submissive. It then progresses from nafs-e-‘Ammarah (the nafs which commands to evil), to nafs-e-Lawwamah (the nafs which feels guilt and remorse on falling into sin), to Nafs-e-Mutmainnah … that nafs which is completely content with what pleases Allah Ta’ala; which is entirely satisfied in fulfilling the Commandments of Allah Ta’ala.

Our Sheikh, Hadhrat Moulana Hakeem Muhammad Akhtar Saheb (Rahmatullahi ‘alayh) had explained that shaytaan had three ‘ains in him, but did not have the fourth ‘ain. He was an ‘Aalim, ‘Aabid and ‘Aarif.

Shaytaan is such an ‘Aalim (Scholar) that he is well acquainted with all the Shari’ahs of the Ambiyaa (Alaihimus Salaam), and is able to mislead and delude many learned ones as well. Allah Ta’ala safeguard us all. …He was such an ‘Aabid (worshipper) that it is mentioned that there is no place on the surface of the earth on which he did not make Sujood to Allah Ta’ala. Due to his ‘Ibaadah, he was granted the privilege of residing in the heavens. He was such an ‘Aarif of Allah Ta’ala that even when he committed kufr; when he rejected the command of Allah Ta’ala and challenged Allah Ta’ala, and had angered Allah Ta’ala, he knew that Allah Ta’ala’s anger does not overpower Him and does not affect His justice. He thus made Dua' for life ... for respite. ...  This Dua' was accepted:


When this respite was granted, shaytaan’s effort and work thereafter was and is to mislead man, and he promised:

“Then I will come to them from before them and behind them, from their right and from their left, and You will not find most of them as thankful ones (i.e. they will not be dutiful to You).”
[Surah Al-A’raaf 7: 17]

Shaytaan’s determination and resolve is so fierce and intense, that he will leave no stone unturned to lead people into kufr; that they too become the inhabitants of Jahannum, like him. Allah Ta’ala has made it clear to us, warning us, time and again, that shaytaan is our enemy and warning us of his deceit and schemes.

“Surely shaytaan is an enemy to you, so treat him
as an enemy He only invites his Hizb (followers) that they may become the dwellers of the blazing Fire …”
[Surah Fatir  35:6]

To counter these efforts of shaytaan, we will have to turn to Allah Ta’ala, seek His assistance and protection, and live our lives in the obedience of Allah Ta’ala.  Allah Ta’ala directs us thus:

“And if an evil whisper comes to you from shaytaan then seek refuge with Allah. Verily, He is All-Hearer, All Knower.”
[Surah Al-A’raaf  7 : 200]

Hadhrat Moulana Hakeem Muhammad Akhtar Saheb (Rahmatullah ‘Alayh)   explained that shaytaan is an ‘Aalim, was an ‘Aabid and an ‘Aarif but he was not ‘Aashiq (ardent lover) of Allah Ta’ala. He was an ‘Aashiq of himself. Had he been a true ‘Aashiq of Allah Ta’ala, he would have been restless and full of remorse and regret for not submitting to the Command of Allah Ta’ala … because a lover is always keen to please the Beloved and always anxious that nothing be done that would displease the Beloved; rather he even blamed Allah Ta’ala although he knew the outcome of his disobedience. Hadhrat Aadam (Alaihis Salaam) was a true ‘Aashiq. When he erred, by eating of the forbidden tree, he turned to Allah Ta’ala seeking Allah Ta’ala’s Forgiveness. This is the condition of Ishq.

“Our Lord, we have wronged ourselves, and if You do not forgive us and have mercy upon us, we will surely be among the losers.”
[Surah Al-A’raaf 7:23]

Hadhrat Mufti Muhammad Shafi Saheb (Rahmatullah ‘Alayh) had mentioned in his Tafseer, Ma’ariful Qur’aan, that Iblees was given the title of ‘Ta-oos Al-Malaa’ikah’ (The peacock among the angels), because of his extensive knowledge. However, his downfall and eternal disgrace was due to his nafs: his conceit and his pride. According to some Mufassireen, his self-love and ambition were also factors that destroyed him. From this, we should take lesson: We should not entertain vanity, conceit, pride and a sense of superiority because of our knowledge, our actions and even our Imaan. These are such grave maladies that can lead to total deprivation of the bounty of Imaan. …The famous incident of the Sheikh Abu Abdullah Al-Andalusi offers us a great lesson. He was a famous ‘Aalim and Muhaddith and had thousands of Mureeds. He had memorised many thousands of Ahadith and was well-versed in all the modes of Qira’ah.

Once, on a journey, accompanied by a large number of followers, they reached a Christian village with many churches. There, the Sheikh’s gaze fell on a beautiful Christian girl and his entire condition changed. When he was asked the reason for his behavior, he said that he was in love with the Christian girl and as such, would not leave the village.

Although his students encouraged him to leave the village and return with them, he refused, saying that the garb of Wilayat (friendship of Allah Ta’ala) was removed from him and he was bereft of Hidayah (guidance). …What a great trial. …He instructed them to leave him there. Broken-hearted and in tears, they left him behind. After a year, they went back to see the Sheikh … only to find him tending to pigs! The Christian girl’s father had stipulated that he look after pigs and become a Christian if he wanted to marry her; which the Sheikh agreed to do. …Allah Ta’ala is Mu’izz – the One who grants Honour, and He is Mudhil – the One who grants dishonour and disgrace.

When asked how he had reached that unfortunate condition, he replied that he had been distanced from Allah Ta’ala and almost all the knowledge that he was blessed with was lost to him. It is a lengthy story, but it is said that he then cried and begged of Allah Ta’ala. His students also sincerely made Dua for him. Shortly thereafter, the Sheikh read the Shahadah and re-entered into the fold of Islam. When he was asked as to what was the cause of his Kufr and the great ordeal that he had endured, he explained that when they had arrived at the village and he saw the churches and the Christian people there, he looked down upon them … because they were worshippers of the cross, and considered himself superior because he was a Believer in Allah Ta’ala. He had not acknowledged Allah Ta’ala’s favour upon him, over them. He then felt as if a little bird flew out of his heart … and that was Imaan, which left him. That Divine Chastisement was endured because of the nafs. May Allah Ta’ala protect us all.

So there is a need for Islaah and Tazkiyah, no matter who we are and what level of Ilm and Imaan we have attained. This effort of Islaah should not be neglected; lest the nafs puffs up and inflates with Ujub and Kibr, and then destroys us. May Allah Ta’ala grant us the recognition of nafs; as well as protect us all from the mischief of nafs and shaytaan. May Allah Ta’ala grant us death on Imaan, Najaat and Jannah.