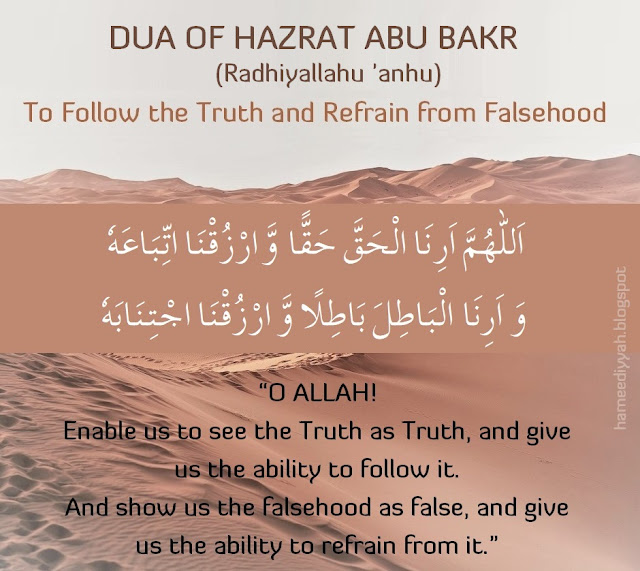 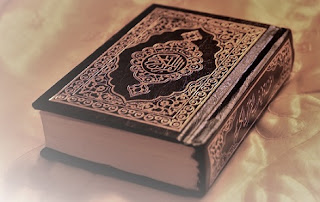 The knowledge of Deen is Qur’aan and Sunnah. The Sunnah is the practical implementation and explanation of the Commandments of the Qur’aan Shareef. …Allah Ta’ala reward our great Fuqaha. They sacrificed their entire lives for this Deen. Day and night were spent in the services of Deen. Many years were spent in learning, and many years in disseminating that knowledge, for the benefit of the Ummah. Allah Ta'ala blessed them with knowledge, understanding, insight and wisdom. They structured and preserved Fiqh, taking from Qur’aan and Sunnah.

Nowadays, we have people – Salafis - who criticise these great Fuqaha and Imams. They openly reject the A’immah al-arba‘ah (the four Imams) and denounce and mock those who follow them. They undermine the noble status of the great Imams and create suspicions and reservations in the minds of those who align themselves to a Madhab. These are people who increase the disunity in the Ummah.

A simple, straightforward answer is: “We follow Qur’aan and Sunnah as explained by Imam Abu Hanifa (Rahmatullahi ‘alayh).”

When a person asks us this question, we should ask in return: “Do you follow an Imam, or do you follow your own understanding of Qur’aan and Hadith?”

The principles and method employed by Imam Abu Hanifa (Rahmatullahi ‘alayh), towards Fiqh, was firstly, seeking guidance from the Qur’aan Shareef. If further details were required and sought, he would direct his attention to what is established of the Sunnah. The next source of knowledge was the practise of the Sahabah (Radhiyallahu ‘anhum) and their teachings. If a matter could not be resolved, then other means were adopted such as Qiyaas (deducing laws on matters which are not explicitly covered by the Qur’aan or Sunnah).

Similarly, all the respected and honourable Imams have done a great, immense favour to the Ummah – that is, for those who want to practise Deen. The Madhaahib-e-Arba'a are all based on the Qur’aan and Sunnah. Only the audacious and fool-hardy will try to negate the scholarly contributions of these great masters in the field of Jurisprudence.

...A person appreciates food which is ready. The preparations, arrangements and hard work have been done. Someone undertook the task of preparing and cooking. All that is required, is to sit and eat. They – the Fuqaha – have prepared the spiritual food and presented it to us. It is ready for us to 'eat', so to speak. We do not have to re-invent the wheel and undertake the efforts that they undertook. Their years of study and research, their teachings and explanations are presented to us on a platter. All that is required from us, is Amal – that is, we need to practise on what they have conveyed of the noble and pure teachings of Deen; of Qur’aan and Sunnah.

We should read the authentic biographies of the four great Imams. This will increase us in love, respect, reverence and appreciation for their exceptional and extraordinary services and contributions to Deen. It will give us confidence and conviction that our following is correct; that we are following people who are people of Qur’aan and Sunnah. We should not allow anyone to intimidate or bully us in respect to Taqleed and following a Madhab.

As for Ikhtilaaf (differences), then for those who want to make Amal, choose one righteous, pious ‘Aalim and follow him.

May Allah Ta’ala grant us the understanding and appreciation and the Taufeeq of practising correctly on Deen, as taught and expounded by our great Imams.

Dua to be read on a cold day

Rasulullah  ﷺ  is reported to have said:

When a person recites the following supplication, Allah Ta’ala says to Jahannum: ‘Indeed, a servant of Mine has sought refuge in Me, from you. Bear testimony that I have granted him salvation from you.’ 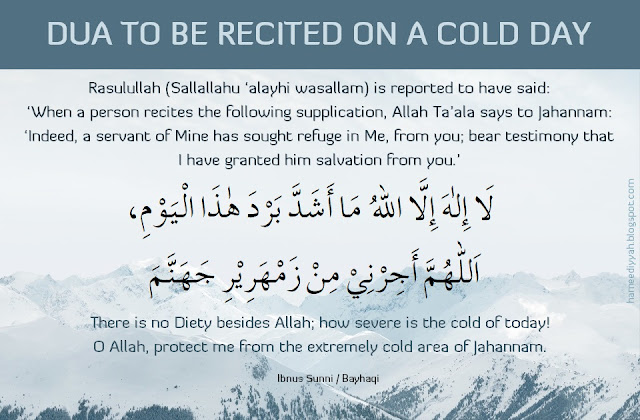